The introduction of antimicrobial agents in the 1940s for human clinical medicine but also in animal husbandry changed the options for treatment completely. Successful treatment of infections which were previously considered lethal became possible. In veterinary medicine, the use of antimicrobials has improved animal health, welfare and the efficiency of production.

However, the benefits of antimicrobial discovery were soon hampered. The use of antimicrobials invariably leads to selection of bacteria that are resistant against the substance used. Resistance can then spread in populations and the environment. 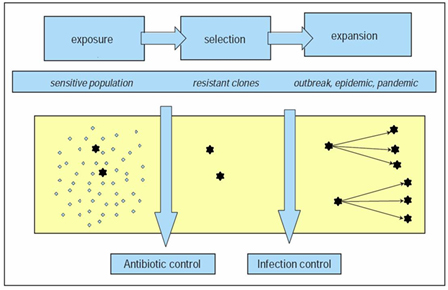 Model of resistance emergence and the crucial roles of antibiotic and infection control in preventing outbreaks, epidemics and pandemics

In human medicine, antimicrobial resistance (AMR) leads to increased morbidity and mortality.  The European Centre for Disease Prevention and Control (ECDC) estimates that AMR results annually in 25,000 deaths and related costs of over 1.5 billion € in healthcare expenses and productivity losses due to work absenteeism (link to pdf).

Also in veterinary medicine the efficacy of antimicrobial treatments is declining and from several bacterial diseases (e.g. swine dysenteria) multidrug resistant strains are circulating making these infections untreatable resulting in a high economic burden for the producers and animal welfare problems. Due to overuse of certain classes antimicrobials (e.g. tetracyclines) and beneficial pharmacological characteristics an undesirable shift towards new drugs is observed, which should preferably be reserved for human use only.

The problem of treatment failure is amplified by the fact that new and effective antimicrobials are not currently being developed at a sufficient rate nor will they be developed at a higher rate in the near future. Antimicrobial resistance therefore poses a major threat to the continued efficacy of antimicrobial agents in both human and veterinary medicine.

As described above, spread of resistant microorganisms in the food chain can potentially have dramatic consequences. From emergence of resistance and along the transmission pathways, there are knowledge gaps that need to be addressed to allow for the development of science-based measures. The ultimate aim of these measures is to decrease or at least, minimise the further development and spread of antimicrobial resistance.

Knowledge on the ecology and transfer of antimicrobial resistant bacteria throughout the food chain remains incomplete, and the decision making process needs to be supported by sound scientific evidence. EFFORT will contribute to the production of novel scientific approaches that will provide such evidence. Through its results, the EFFORT research will provide scientific evidence and high quality data that will inform decision makers, the scientific community and other stakeholders about the consequences of AMR in the food chain, in relation to animal health and welfare, food safety and economic aspects. These results can be used to support political decisions and to prioritise risk management options along the food chain.